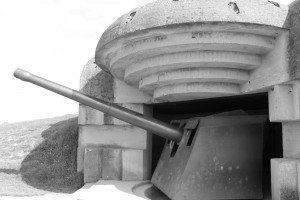 The Batterie Des Longues Sur Mer is a German coastal defense sector comprised of bunkers and artillery installations.  These fortifications were part of the Atlantic Wall on the Normandy coast just east of Omaha Beach. Included are photos of various defensive bunkers that housed artillery as well as naval observation bunkers.  Several photos depict the steep and seemingly impenetrable cliffs that adjoin the Normandy coast.