Today’s post is in tribute to the June 6, 1944, D-Day invasion by the Allies during World War II that began the liberation of Europe. This represented the single largest amphibious invasion in the history of warfare. The task was daunting not only in terms of the operational coordination required but also in the fact that it was taking place on the heavily defended Atlantic Wall.

The invasion from the sea was preceded first by paratroopers that were dropped in the darkness behind enemy lines to secure important bridges, chokeholds, and towns to facilitate the push inland from those arriving on the beaches. Despite carefully laid plans, many of the paratroopers missed their drop zones and were scattered throughout the French countryside.

Many of the World War II Veterans that I have interviewed were paratroopers, infantrymen, medics, engineers, or were part of the Coast Guard that participated on D-Day. A sample of some of those oral history interviews can be found here. These interviews not only preserve an important part of history but also provide the Veteran and their family with an everlasting memory.

Let us not forget their sacrifice. Those that gave all, as well as those that were wounded and remain scarred to this day. Remember freedom is not free. We are free because of the brave and the blood that was paid.

On March 10, 2021, we all lost a legend. Rock Merritt was a World War II Paratrooper with the 82nd Airborne. Rock was one of my heroes and was also my first oral history interview.

Rock Merritt was an inaugural member of the All American Hall of Fame for the 82nd Airborne. To put that into perspective, Rock was one of twenty members inducted and his class included eight legendary Generals. Rock jumped on D-Day as one of the first boots on the ground in Normandy. Rock also jumped during Operation Market Garden and participated in the Battle of the Bulge. Photos from his long and distinguished military career can be viewed here.

Rock Merritt served his country in World War II, Vietnam, and right to the end. Rock was mentioned prominently during President Obama’s address during the 70th Anniversary of D-Day. He once famously told President Obama that he only need make the call as Rock was ready to serve when needed. Rock was bigger than life. Beloved at Fort Bragg and respected by our current soldiers as a soldier’s soldier.

Rock was a caring and kind soul who gave everything to his country. He impacted so many lives with his advice, knowledge, and smile. Forever a member of the Greatest Generation. Fly high Rock. Salute. 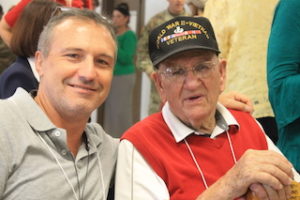