We lost a true All-American Hero on January 4, 2022. Bob Chisholm was a WWII Paratrooper with the 82nd Airborne who then went on to also serve his country in Korea and then later in Viet Nam.

Bob was selected as a member of the second class for the 82nd Airborne’s All American Hall of Fame. This incredible honor is bestowed only upon the very best of the best paratroopers. Bob had combat jumps into Normandy on D-Day, into Holland for Operation Market Garden, and then fought in the Battle of the Bulge in Belgium.

As a 2nd Lieutenant, Bob Chisholm participated in one of the last major combat actions in Korea where he earned a battlefield promotion to 1st Lieutenant. Finally, Bob served bravely in classified missions in both Viet Nam and Thailand. LTC Bob Chisholm retired from the Army in 1971 and is one of only 325 soldiers to have ever earned the Triple CIB (Combat Infantry Badge).

I conducted a Veteran oral history interview of Bob Chisholm in 2014 while in Dallas, Texas. Bob’s oral history interview was very thoughtful, he covered his entire career, and his advice for future generations at the end of the interview is something we all need now. Bob Chisholm loved his country and his fellow soldier. Gracious with both his time and money, Bob helped to found the El Paso Benavides-Patterson All Airborne Chapter of the 82nd Airborne Division Association and was a sustaining member of the Family and Friends of the 508 Parachute Infantry Regiment Association.

Bob, you represented the very best that America had to offer. You impacted so many lives during and after your military service. A true treasure. An All-American Hero. Fly high Bob. Salute.

US Paratrooper – 82nd Airborne and POW

Patrick Russell conducted this interview on November 5, 2016, in Charleston, South Carolina during the annual reunion for the Family and Friends of the 508 Parachute Infantry Regiment Association.

Brodie Hand is an American Paratrooper from the 508 P.I.R. of the 82nd Airborne where he obtained the rank of Corporal. Brodie was born in a small town in the big state of Texas and volunteered for the U.S. Army during World War II. As a paratrooper, Brodie jumped on D-Day into Normandy and was captured by German forces on the first day.

Brodie remained a POW for the duration of World War II while working in a mine and reflects on that difficult experience during the interview. Additionally, Brodie describes his training to become a paratrooper, how he got captured, and the long journey home. 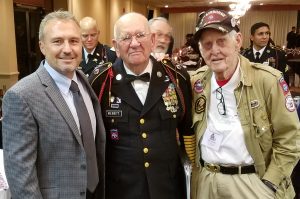 Veterans Day is the perfect day to share an update for last Saturday’s events at the 508 Parachute Infantry Regiment Association Reunion.  On that day, I conducted an audio and video presentation to the membership.  My presentation focused on the progress of my oral history interviews and why preserving the legacy of all Veterans is important.  After my presentation, I filmed a panel discussion of 508 PIR Veterans and current service members.  The panel discussion focused on comparing and contrasting experiences and military service across the different eras.

Continuing that busy day, I later had the privilege to complete two oral history interviews.  The first interview was with Brodie Hand, a World War II Veteran who served in 508 Company C, 82nd Airborne Division.  Corporal Hand participated in the Normandy campaign as a paratrooper and subsequently was captured and became a POW for the rest of the war.  The second interview was with Justin Graham, an active duty service member with the 508 PIR, 82nd Airborne.  SSG Graham has been deployed three times to Afghanistan, in 2010, 2012, and 2014.  It was fantastic that these two heroes took the time to speak with me.  I was equally delighted to be able to compare and contrast a World War II Veteran with a current soldier.  What I can say definitively is that they both love their country, want the best for their country, and believe in the duty, honor, and respect.

The 508 PIR Association Reunion concluded that evening with a wonderful dinner banquet and was attended by a color guard of the 82nd Airborne as well as by many of active duty service members in their “dress blues”.  Looking forward to more good times next year when we meet again in Fort Bragg for the 2017 Reunion.  Airborne all the way! 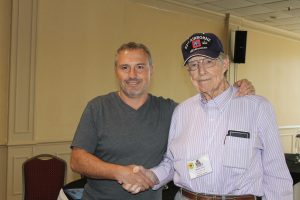