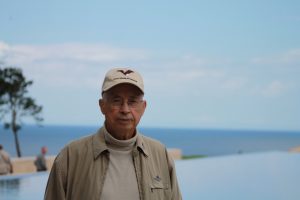 Patrick Russell conducted this interview on June 5, 2014, at Omaha Beach, Normandy, France during the celebrations for the 70th Anniversary of the D-Day Invasion. This was a challenging interview to handle in that it was conducted in the public spaces of the Visitor Center at Omaha Beach. Since it was not a controlled environment, you will hear background noises of other visitors. However, when given the opportunity to conduct an interview, you do what you can do.

Norman Gaddis is an American pilot who was born in Tennessee. Norman served in the U.S. Army Air Force during World War II from 1942-1945. Norman received his final pilot training just before the end of World War II and as a result, he flew no combat missions during the war. After World War II, Norman was recalled as a pilot for the U.S. Air Force in 1949 and he ended up providing fighter escort for the supplies being delivered during the Berlin airlift. In 1967, Norman was shot down over Hanoi and became a POW for the entire duration of the Vietnam War. Norman Gaddis was released as a POW in 1973 and eventually retired from the Air Force in 1976 as a Brigadier General.

During this short interview, Norman discusses the details for how he was shot down in Vietnam and the cruel treatment and torture he received as a POW. Altogether, Norman spent 1004 days in solitary confinement and a total of 2,124 days as a prisoner of war in Vietnam.